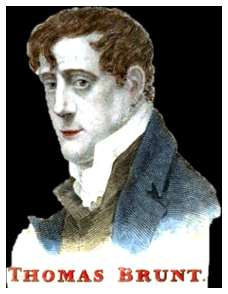 John Brunt was born in about 1790. He worked as a shoemaker and for a time was earning nearly fifty shillings a week. However, during the post-war depression his income fell dramatically and his wife and child had to exist on only ten shillings a week.

Brunt and his family were forced to move to a squalid area of London called Fox Court. Here Brunt met Richard Tidd, another shoemaker struggling to survive on a low wage. The two men shared an interest in politics and by 1816 were both members of the Society of Spencean Philanthropists. Other members of the group included Arthur Thistlewood, James Watson, James Ings, William Davidson, Thomas Preston and John Hopper.

The government became very concerned about this group that they employed a spy, John Castle, to join the Spenceans and report on their activities. In October 1816 Castle reported to John Stafford, supervisor of Home Office spies, that a small group of Spenceans were planning to overthrow the British government.

On 2nd December 1816 the Spencean group organised a mass meeting at Spa Fields, Islington. The speakers at the meeting included Henry ‘Orator’ Hunt and James Watson. The magistrates decided to disperse the meeting and while Stafford and eighty police officers were doing this, one of the men, Joseph Rhodes was stabbed. Four leaders of the group, James Watson, Arthur Thistlewood, Thomas Preston and John Hopper were arrested and charged with high treason.

James Watson was the first to be tried. However, the main prosecution witness was the government spy, John Castle. The defence council was able to show that John Castle had a long criminal record and that his testimony was unreliable. The jury concluded that Castle was an agent provocateur (a person employed to incite suspected people to some open action that will make them liable to punishment) and refused to convict Watson. As the case against Watson had failed, it was decided to release the other three men who were due to be tried for the same offence.

The Spenceans continued to meet in 1817. Arthur Thistlewood was still convinced a successful violent revolution was still possible. James Watson now doubted the wisdom of this strategy and although he still attended meetings, he gradually lost control of the group to the more militant ideas of Thistlewood.

On 22nd February 1820, George Edwards pointed out to Arthur Thistlewood an item in the New Times that several members of the British government were going to have dinner at Lord Harrowby’s house at 39 Grosvenor Square. John Brunt agreed to join Thistlewood and and twenty-seven other Spenceans in the plot to kill the government ministers dining at Lord Harrowby’s house on 23rd February.

On the 23rd February Thistlewood’s gang assembled in a hayloft in Cato Street, a short distance away from Grosvenor Square. However, government ministers were not meeting at the home of Earl of Harrowby. The Spenceans had been set up by George Edwards, a government spy who had infiltrated the Spencean Society. Thirteen police officers led by George Ruthven stormed the hay loft. Several members of the gang refused to surrender their weapons and one police officer, Richard Smithers, was killed by Arthur Thistlewood. Four of the conspirators, Thistlewood, Brunt, Robert Adams and John Harrison escaped out of a window. John Brunt was unaware that Edwards had been a spy and that the police knew he had been involved in the plot. Brunt returned to Fox Court where he was arrested the next day.

Eleven men were eventually charged with being involved in the Cato Street Conspiracy. Charges against Robert Adams were dropped when he agreed to give evidence against the other men in court. On 28th April 1820, John Brunt, Richard Tidd, Arthur Thistlewood, James Ings and William Davidson were found guilty of high treason and sentenced to death. John Harrison, James Wilson, Richard Bradburn, John Strange and Charles Copper were also found guilty but their original sentence of execution was subsequently commuted to transportation for life.