You are here: HomenextNew contributionsnextBringing Cato Street to the classroom

Bringing Cato Street to the classroom 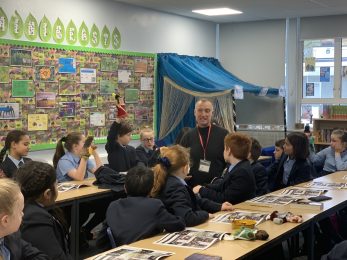 The visits were integral to the ‘West End Job’ bicentenary project which included bringing the Cato Street Conspiracy into local primary school classrooms.

Percy Bysshe Shelley’s The Mask of Anarchy was one of the poems that students used to understand the conspiracy. In the poem, the parliamentary cabinet ministers are introduced as menacing and cruel: Lord Castlereagh, Eldon and Sidmouth embody murder, fraud and hypocrisy. Castlereagh is depicted with blood hounds, Eldon’s tears become heavy stones and Sidmouth uses a crocodile as a method of transportation.

“I met Murder on the way – He had a mask like Castlereagh – Very smooth he looked, yet grim; Seven bloodhounds followed him”

Shelley wrote the poem following the Peterloo Massacre, when the Manchester Yeomen charged a crowd, killing between 10 and 20 civilians and injuring many more at a rally for parliamentary reform in August 1819, six months before the Cato Street Conspiracy. The government denied public outcry by establishing the Six Acts, also known as the ‘Gagging Acts’, laws restricting the press and free speech. 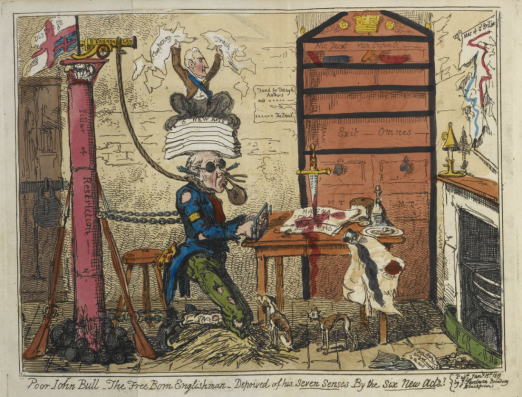 Political cartoon by George Cruikshank, 1819. Image from The British Library

The last line of the Mask of Anarchy—“Ye are many – they are few”—imparts the sense of power London radicals wished to portray and the palpable fear felt by the British government concerning radicalism in the early 19th century. Fearing political cartoons like the one on the right, the British government sought to quash criticism. In Cruickshank’s cartoon, John Bull, England personified, is chained and tied up—stripped of his senses due to the Six Acts.