The Netflix fictional series ‘Bridgerton’ set in Grosvenor Square in 1813 has created a great deal of interest in what London was like during the Regency period. Actor Rege-Jean Page, who plays the Duke of Hastings in the show even reminds us of William Davidson the dapper Jamaican conspirator. The period drama based on Julia Quinn’s book series of the same name. The Regency romp set around the fictitious Bridgerton family who live in a grand house in Grosvenor Square. In the real London of 1813, Lord Harrowby resided in this prestigious square.  RH Viz has used archive documents to try and recreate how the square would have looked at this time.  In this respect, RH Viz have stuck strictly to historical records, unlike Bridgerton, which often has a much looser disregard for historical accuracy — such as the string quartet in one scene playing Taylor Swift! RH Viz produced two short films on You Tube that show the opulent interior of Lord Harrowby’s grand house at 39 (later 44) Grosvenor Square.  These show the house by daylight and in the evening as they would have looked at the 8pm scheduled time of the conspirators planned attack.  A 3D VR tour of the house can be seen at the end of this article.

Sadly many of the original homes on the square were demolished after WW2.  However, RH Viz was able to make use of architectural plans and photographs for Lord Harrowby’s house 44 (39) Grosvenor square available on the British History Online website:

RH Viz were able to recreate 39, Grosvenor Square as might’ve appeared in 1820 using archive images dating from later in the 19th century.  The image below dates from around 1874.  Although over fifty years after the Cato Street Conspiracy the façade would not have been much different. 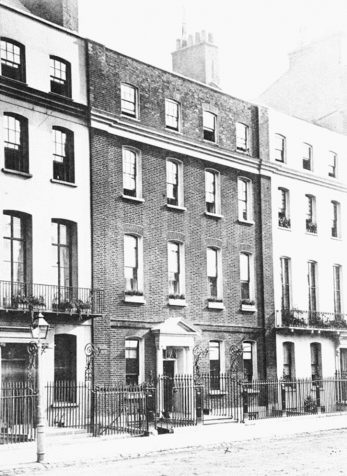 RH Viz used this image from the British History Online survey to recreate the front of Lord Harrowby’s Grosvenor Square hoe. No. 44 Grosvenor Square in c. 1874, with No. 43 (right) and No. 45 (left).

Interior images from the British History online website allowed RH Viz to create our 3D VR recreation of how the interior of Lord Harrowby’s house would have looked in 1820.

Please find an interactive tour on Kuula which will allow us to literally take people back into the past via VR.