You are here: HomenextNew contributionsnextWilliam Davidson and the West End Job Exhibition Scenes 1-10 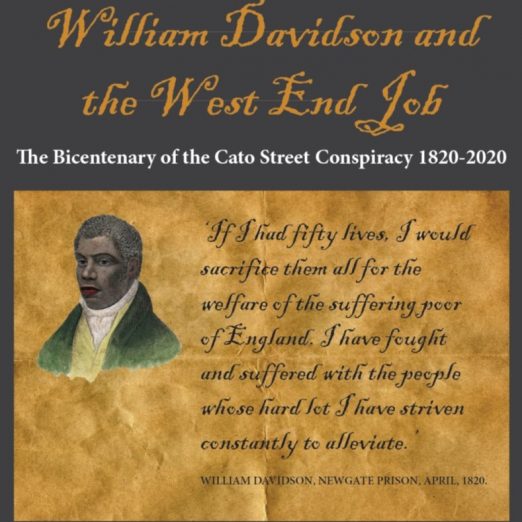 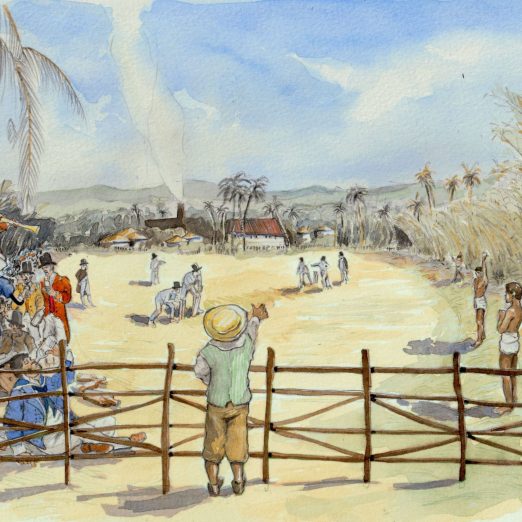 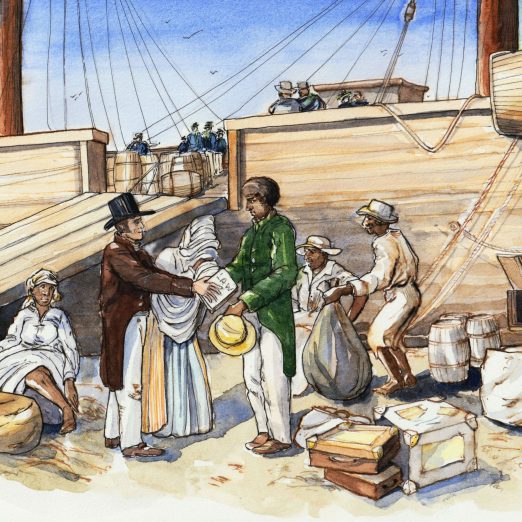 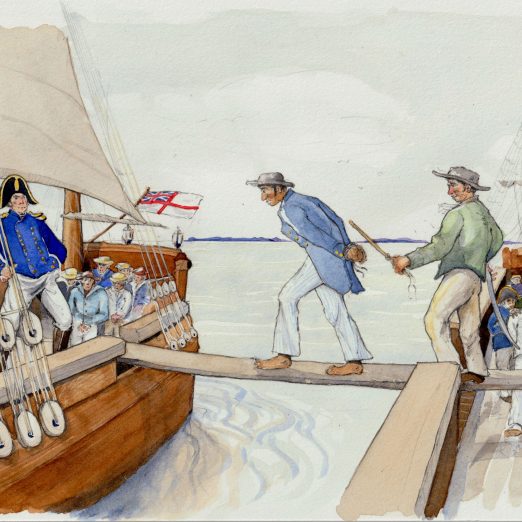 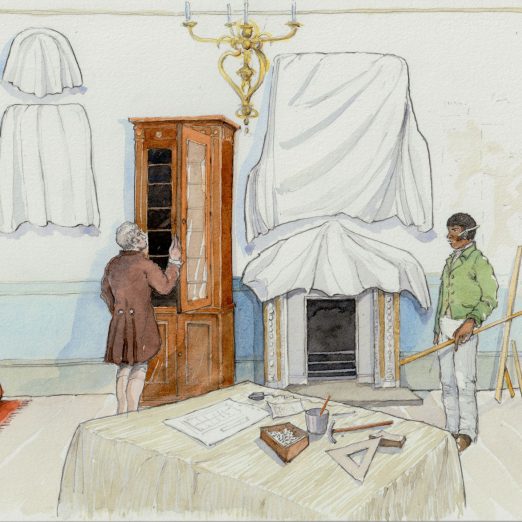 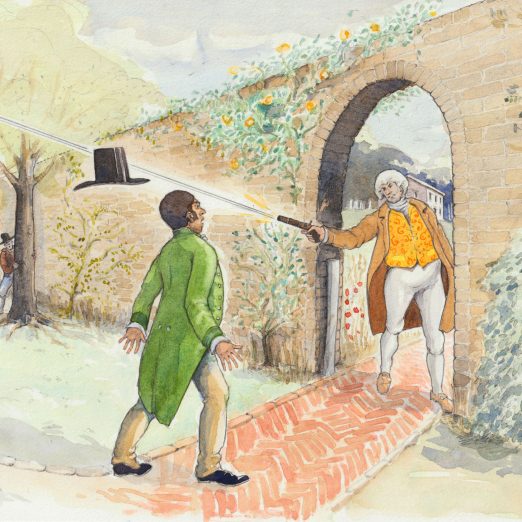 Scene 5: The Wrong Salt! -Davidson fell in love with a Miss Salt but her father refused to accept him and attempted to kill William
Kate Morton 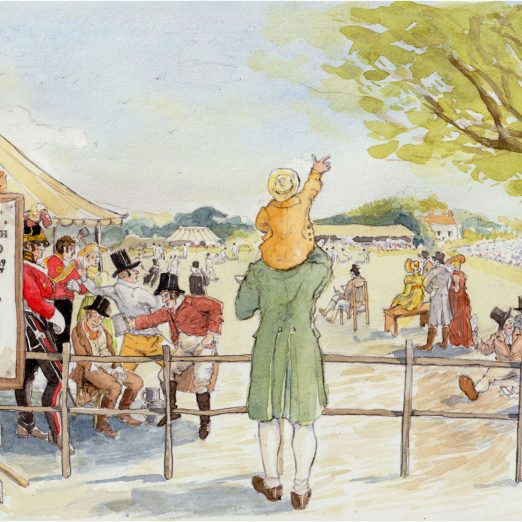 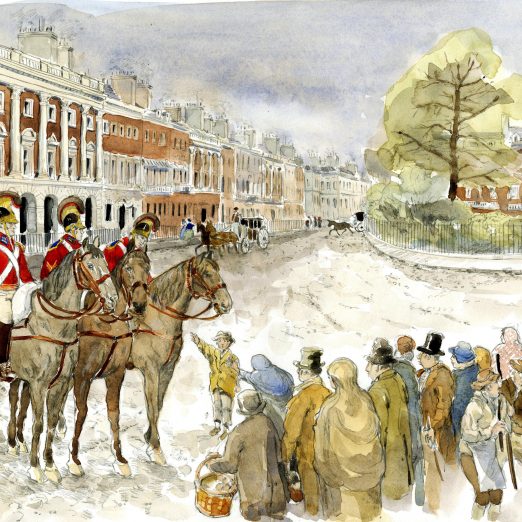 Scene 7: Harrison in Grosvenor Square-John Harrison and his Life Guards comrades were forced to stand guard over Grosvenor Square to protect its aristocratic residence from poor, hungry Londoners angry with how their country was being run
Kate Morton 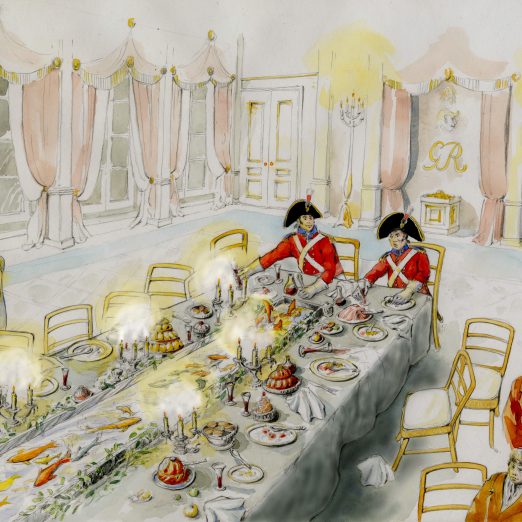 Scene 8: the Extravagant Prince Regent-John Harrison digs into leftovers at the conclusion of the Regency Fete June 1811
Kate Morton 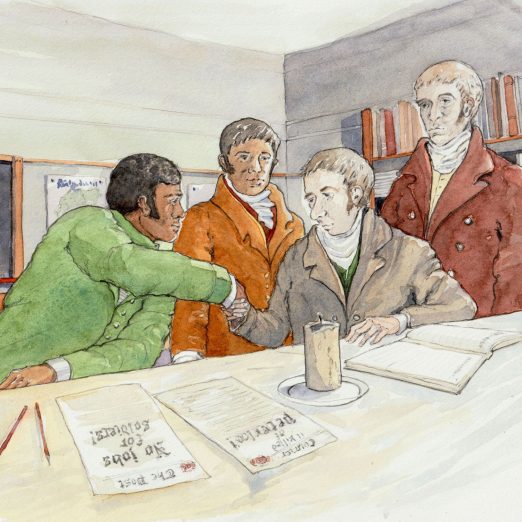 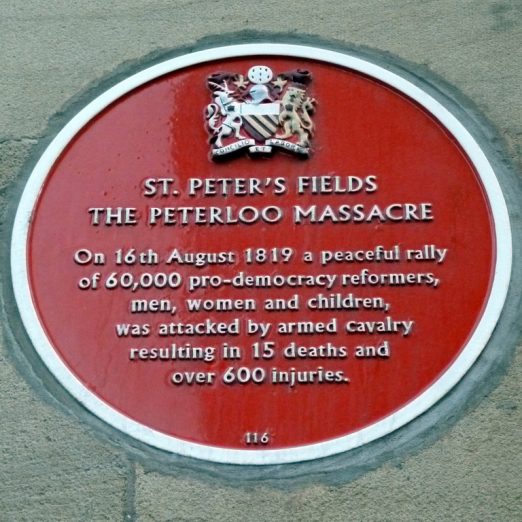 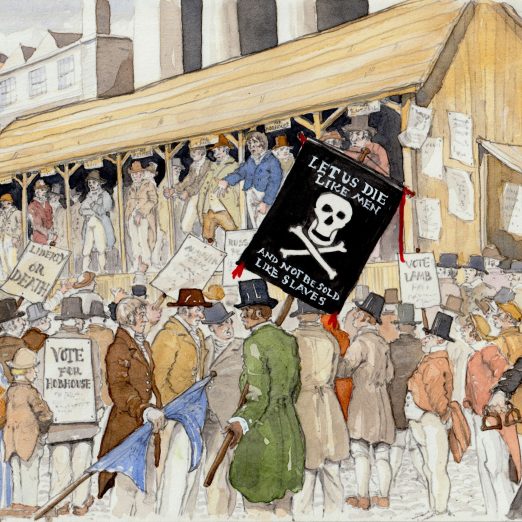 Scene 10; the Covent Garden Hustings William Davidson supported John Cam Hobhouse for Westminster MP at the December, 1818 hustings for the Westminster by election. he carried a cross-and-skull-bones banner.
Kate Morton

‘If I had fifty lives, I would sacrifice them all for the welfare of the suffering poor of England. I have fought and suffered with the people whose hard lot I have striven constantly to alleviate.’

On 1 May 1820, outside Newgate Prison, in front of a huge crowd of onlookers, William Davidson and his fellow Cato Street conspirators—Arthur Thistlewood, James Ings, Richard Tidd and John Brunt— were hanged for high treason. Then they were decapitated in the last brutal act of a murderous conspiracy, ‘The West End Job’ as they’d called it, that aimed to assassinate Prime Minister Lord Liverpool and his cabinet and spark a British version of the French Revolution. The Cato Street conspirators matched the Gunpowder plotters in their daring—and in their fate—but sadly their story is almost unknown by people today.

Thanks to our grant from the Heritage Fund, Westminster Community Reminiscence and Archive Group and our partners hope to use the bicentenary to raise awareness of an event that has both local and national significance.

2020 has also shone the spotlight on Britain’s colonial past and its role in the slave trade. By telling this story through the eyes of Jamaican conspirator William Davidson, we can also look at inequalities beyond these shores. It will also help to raise awareness of a significant individual in Black British history, whose story deserves to be more widely known. Having been convicted of committing high treason, Davidson was asked by the judge, why he should not be sentenced to death. Invoking Magna Carta, he likened his co-conspirators to the barons who had stood up to King John in 1215. In Davidson’s view, the King’s ministers could be called to account if they breached the rights of the people, and this did not amount to treason against the King himself.

During Black History Month October,  2020 children from Y6 at Oratory Catholic Primary School, Chelsea, listened to the story of William Davidson and used the incredible artwork of artist Kate Morton to record how they felt about his story.  Their work is a tribute to a great Black Briton.

Westminster Archives worked over two days with Jamie Ward’s Y6 class at Oratory Catholic Primary School during Black History Month in October 2020.  William Davidson’s story was split into twenty scenes, with ten scenes covered at each session.  Children worked in groups of three to put themselves in William’s shoes to imagine how he felt over his life time.  WCRAG volunteer Sarah Sharpton went through all of the children’s works to select quotes for the exhibition.

William Davidson was born in Kingston, Jamaica in 1786 to a white Scottish father and a freed Black mother descended from slaves on the Jamaican sugar plantations. Davidson witnessed firsthand the cruelties of the slave trade and the Colonial sugar industry. An early inspiration for him may have been the Jamaican Maroons, escapees who fought back against those who had enslaved them. Their fight for freedom set an example that William would later follow as an adult in England.

He felt like the outsider, he felt invisible.  –Arthur, Y6

He felt like an outcast from society even though he was young…. He will never forgive the slaveowners that corrupted Jamaica. –Oscar, Y6

Scene 2: To the Mother Country

In 1801, William’s father sent him to his native Scotland to study law . His mother was devastated to see him leave Jamaica, but sent money to support him in his new life abroad. William eventually settled into a legal apprenticeship in Liverpool, just as the debate over the abolition of the Slave Trade began to hot up.

He had a chance to start a new life, but he felt really sad leaving the place he grew up.   -Bear Y6

After the Napoleonic wars began in 1803, William was press-ganged into service on a Royal Navy ship. He witnessed the cruel floggings needed to maintain discipline in Nelson’s navy, and the divisions between the “gentlemen officers” and the common sailors that served under them.

William would be filled with burning wrath being forced against his will to do the putrid job of being a sailor in the Royal Navy. —Daniel, Y6

After being press-ganged a second time, William deserted the Navy and fled to Lichfield, Staffordshire around 1812, where he worked as a cabinet-maker. One of his jobs was at Sandon Hall, the home of government minister Lord Harrowby.  The opulence of Harrowby’s home, in contrast to the poverty he had seen in Liverpool, shocked William.

He thinks it’s unfair that super rich people like Lord Harrowby live in a super nice and big house, but poor people have to live in super small dirty houses and live in poverty. —Nathaniel, Y6

In Lichfield, William fell in love with a young heiress named Miss Salt, whose father disapproved of their courtship enough to put a bullet through William’s hat! The conflict over Miss Salt left William heartbroken, and at times suicidal. To escape his depression he moved to London around 1814.

“William must be angry since he was just going to see Miss Salt and he ended up getting arrested, and he also gets told he can’t marry Mr. Salt’s daughter because he is black which makes him feel like an outsider.          —Clementine, Y6

In June 1816, William married Sarah Lane at St Martin-in-the- Fields church, Trafalgar Square.  She was a young widow with four children and they soon had two boys of their own, Duncan and John. They lived in Marylebone, next to Lord’s Cricket ground, where William observed a divided society just as he had as a small boy in Jamaica.

William thought of when he was younger and how the slaves were separated from their masters, like here the Lords and the poor are separated.   —Olimpia, Y6

In 1816, William befriended John Harrison, a former King’s Life Guard. John told William how much the Prince Regent feared a revolution, and how the Life Guard’s had been sent on to the streets of Westminster to protect the homes of a hated government from mobs of hungry, angry Londoners.

It was a sunny day, but after what he heard from John Harrison it felt rainy.—Filippo, Y6

William thought it was wrong for the Life Guards just to protect the rich rather than the poor.—Jake, Y6

In June,1811, John told William he had been on guard at the Regency Fete at Carlton House. The aristocratic guests ate from solid gold plates at tables decorated with streams of live gold-fish. John struggled to understand how people could feast like this, when so many poor folk struggled to find the price of a loaf of bread.

He feels very angry and crazy mad. The Prince Regent has so much money and doesn’t care about the people starving when really he could help them have a better life—Amelia, Y6

Following the Peterloo Massacre of August 1819, the government passed laws that banned large public gatherings and curtailed free speech. John invited William to the  Marylebone Reading Room, and introduced him to the Spencean Philanthropists, who believed in an end to slavery, votes for all and the sharing of Britain’s land and wealth. Amongst those that he met were the revolutionary Arthur Thistlewood and fellow Jamaican radical Robert Wedderburn.

I think he was cross because the government priced the poor out of reading newspapers—Henry, Y6

In December 1819, William showed his anger at Peterloo, by attending the election hustings at Covent Garden.  This was to support the reformer John Cam Hobhouse’s bid to become M.P. for Westminster. Only rich local landowners could vote and William showed his anger at this lack of democracy by carrying a skull and cross bones banner urging people to fight and die for the right to vote.

He goes to the vote with a big banner, which really shows how William wants justice for everyone and really wants everyone treated the same. Not just those who are rich should vote! Everyone should be allowed to vote for who they think is right —Olivia, Y6