Closing The Gates At Hougoumont

Our three Coldstream sergeants led by Lieutenant-Colonel James Macdonnell took part in the siege at Hougoumont, a strong-point in the British defensive line during the Battle of Waterloo on 18 June 1815. The Coldstreamers held the farm for nine hours of continuous fighting. Legge, Lott and Graham managed to shut the North gate,  after it had been forced open by a mad Frenchman wielding a huge axe. Think of Jack Nicholson in the Shining! Wellington believed this was crucial: ‘The success of the Battle of Waterloo turned on the closing of the gates [at Hougoumont]. These gates were closed in the most courageous manner at the very nick of time by the efforts of Sir James Macdonnell.’  This act of  courage by the Coldstreamers was commemorated by a new memorial erected in 2015. 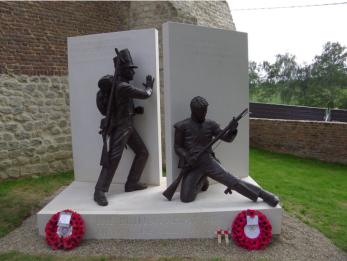