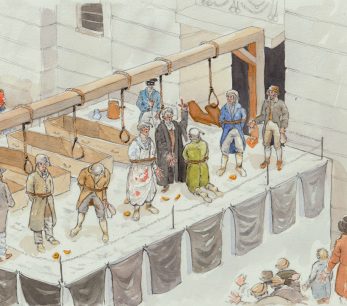 zoom
Scene 20: Newgate Execution. ON May 1st 1820 the cato Street Conspirators were publicly executed outside Newgate prison. The potential leader of the revolutionary government, Westminster MP John Cam Hobhouse and his son can be seen in the bottom right corner.
Kate Morton 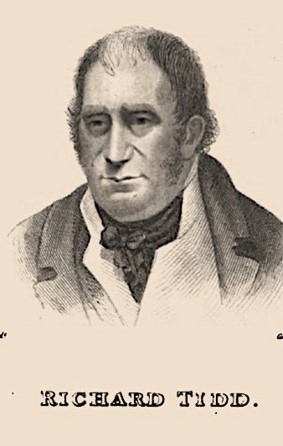 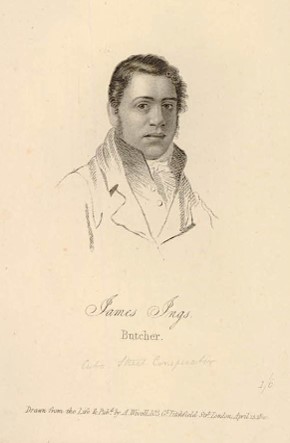 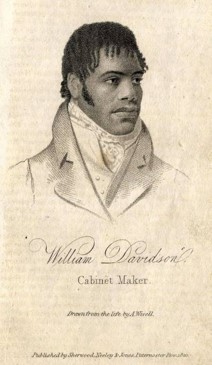 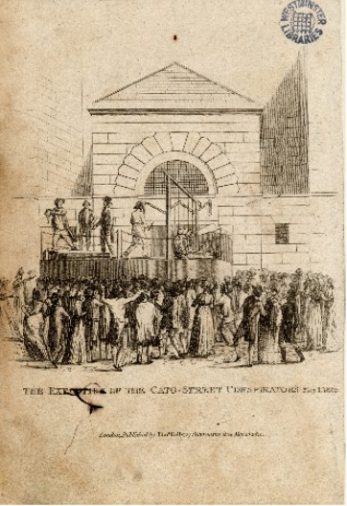 zoom
A drawing of the execution of the conspirators.
Ashbridge Collection 950 (1746c) Westminster Archives 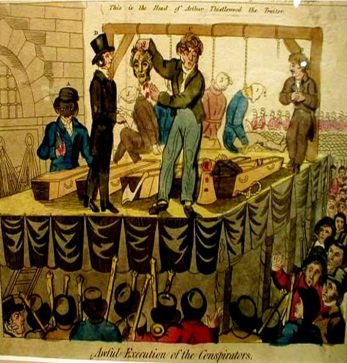 zoom
Another illustration of the conspiracy. The audacious plan was scandalous, and as such occupied a large portion of newspapers across the country for some time, climaxing with their execution.
Awful Execution of the Conspirators (1820) 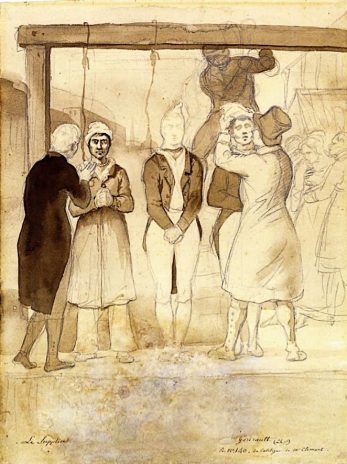 Five men from the initial 11 sentenced to death for their roles in the Cato Street Conspiracy had this sentence carried out. These men were, Arthur Thistlewood, Richard Tidd, James Ings, William Davidson, and John Thomas Brunt. How each man conducted himself in their last moments is an essential component in understanding the character of the men involved in the conspiracy, and as such play a principal role in the wider history of the Cato Street Conspiracy. The May 1st execution of these men highlighted the barbaric nature of a legal system that these men sought to overthrow. This article will delve into both topics, in order to do justice, the intricate forces at work during this time period.

On the gallows, in front of a jeering crowd, Arthur Thistlewood recited the words from his Old Bailey speech:

“Albion is still in chains of slavery. I quit it without regret… I hope the world will be convinced that I have been sincere in my endeavors and that I die a friend to liberty… My motives, I doubt not, will hereafter be justly appreciated.”

Thistlewood was convinced that the future would exonerate him of the charges levied against him, much as it has throughout the course of history to revolutionary figures. He remained steadfast in his beliefs, principally in his Deist faith; he refused repeatedly the offers of the Ordinary of Newgate Horace Cotton to pray, like the majority of the men presented to the scaffold that day. Thistlewood refused a hood, and was reportedly sucking on an orange until the moment when the trapdoor beneath him swung open, killing him in short order.

Richard Tidd walked onto the scaffolding to cheers from the crowd. Tidd’s legs had given way while walking on the scaffolding, causing him to stagger across the stage, almost like a dance. The crowd cheered, to which Tidd acknowledged by ceremoniously bowing to the four sides of the scaffolds, at this point filled with onlookers. Much like Thistlewood, Tidd refused a hood and sucked on an orange until dropped from the gallows.

James Ings was in a manic state by the time he was escorted to the gallows. He had donned his bloodied butchers apron and asked that his other clothes be returned to his wife so that the executioner could not benefit from them; it was custom at this time for the executioner to possess and sell the clothes of the condemned after their sentence was carried out. When Ings walked onto the scaffold, he gave three cheers and a little dance, clearly expecting a reply from the crows assembled before Newgate Prison. This call was scantily returned. While awaiting his death, Ings sung the seditious (in the view of the government) song ‘Whilst Happy in My Native Land,’ that called upon Britons to defend their natural rights found in the Magna Carta. In the song, the one of the key lines from its chorus is “Give me Death or Liberty.” Such sentiments can be seen throughout the time period, most famously by the American Patrick Henry on the eve of the American Revolution. Despite his good intentions, Ings was chastised by Thistlewood for having a poor voice. Former Spencean Philanthropist and soon to be radical MP for Westminster John Cam Hobhouse, who was watching the execution from the crowd had this to say about the event; “Ings, perhaps, was too obstreperous in singing ‘Death of Liberty,’ I am not surprised that Thistlewood told Ings to be quiet ‘so we can die without all this noise.’ Ings never could hold a tune.” Tidd’s last words were something similar, saying “Don’t Ings. There is no use in all this noise. We can die without making a noise!”

William Davidson was the only conspirator to renounce his recent conversion to deism and make use of the services of the Ordinary of Newcastle Prison Horace Cotton. He held Rev’d Cottons hand on his way up the scaffold, and wore a hood/handkerchief much like Ings. He spent his final moments deep in prayer and had the final words “Lord God I pray for the prosperity of King George IV although not his ministers.”

John Thomas Brunt was the last of the conspirators to be called onto the scaffold. He clearly saw this as a slight against his person, and had this to say; “What, am I to be the last? Why is this? They can have my blood but once and why am I to be kept till last? But I suppose they’re afraid I shall say something to the people because I spoke my mind on the trial. However I don’t care.” Similar to Tidd and Thistlewood, Brunt refused to wear a hood. As the noose was placed around his neck, he took a pinch of snuff, a smokeless tobacco inhaled through the nasal cavity which delivers a fast hit of nicotine to the individual. His last words expressed anger at the sight of soldiers guarding the gallows: “What soldiers! What do they do here? I see nothing but a military Government will do for this country, unless there as good many as we are. I see a good many of my friends about.

Following the hanging of these five men, their bodies were left for approximately half an hour before they were cut down. The next phase of their sentence began, with the decapitation of their bodies, to be done by an anonymous but highly skilled individual. This man knew the best way to decapitate men, and begun with a deep cut across the front of the neck, angling the knife under the jaw to the foramen magnum, where the skull opens to allow the spinal cord to interact with the brain. The man would continue this angle of cut all around the neck of the deceased. When this was done, this man took hold of the head and violently twisted it in both directions, separating the head from the neck without needing to saw through fibrous ligaments that remained uncut by his blade. After each head was cut off, the decapitator would display it to the crowd, stating the name of the deceased as well as his sentence and crimes. When Brunt’s turn came, the man dropped the head, spurring cries from the gathered audience of “Yah! Butterfingers!”

The authorities were reportedly worried that the crowd would be agitated to the point of violence during the execution of the Conspiracists. Carpenters were called in to erect barriers to prevent the public from getting to close to the scaffolds, and units of soldiers were brought up in anticipation of violence. These were stationed out of sight of the crowd, but ready for action. In addition to the two troops of Life Guards, 8 artillery pieces were present to control the movement of the crowd, should things turn bloody. The force composition is similar to that which oversaw the Peterloo Massacre just years before. Large banners were prepared to be unfurled with orders to disperse. Thankfully, the crowd did not turn bloody. The crowd booed and jeered the heads of the conspirators as they were presented. Following the decapitation of the conspirators, the streets were flooded with celebration, complete with music and masks. Clearly, the worst fears of the government did not come true, and the popular support the conspiracists though would materialize never did.