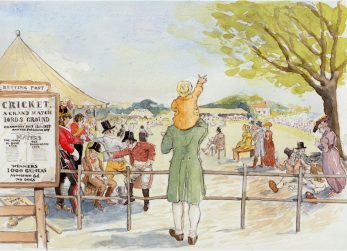 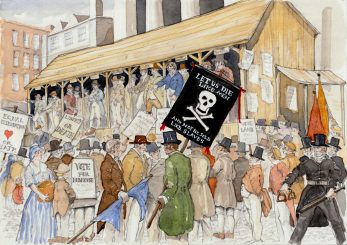 2021 has seen Bridgerton, a period drama set in Grosvenor Square, become the biggest tv phenomenon of lockdown.  This article seeks to look at what provoked the Cato Street Conspirators.  It considers how the aristocrats portrayed in the Netflix series, Bridgerton, used their ownership of the land to maintain power in parliament and maintain the status quo.

As part of our ‘West End Job’ education programme we sought to find simple ways of explaining what drove the Cato Street conspirators to such extreme means. To achieve this aim, we commissioned artist Kate Morton try and show the unfairness of land enclosure in one of her pictures. Kate did this through the image she painted of William Davidson and his son John standing outside Lord’s cricket ground, which stood close to their Marylebone home at 12, Elliott’s Row. Kate’s 1820 view of Lord’s symbolises the barriers to equality that existed in the period that Bridgerton tries to portray on screen. Kate used the fence that keeps William Davidson outside the ground with his son John as a metaphor for enclosure. By the time William Davidson arrived in England, in 1801, the process of fencing in and enclosing the common land was almost complete. For generations, the landed gentry manipulated parliament into allowing them to steal the common land from the poor landless labourers, who were driven to cities like Manchester to seek work in the factories.

One thing Bridgerton does do is show the huge concentration of power in Regency Britain. Just a few hundred families made up a super-rich elite which, compared to the rest of society, held staggeringly disproportionate wealth. They came to London for six months of the year to sit in parliament, which they dominated as only landowners had the vote and could become M.Ps. The anger at how a parliament dominated by landowners had secured enclosure for themselves was a key factor in driving radicals to reform the voting system. The Cato Street Conspiracy was a result of their failure to gain this political reform through legitimate means. Conspirators like William Davidson were prepared to die to gain the vote for the working man.

Bridgerton makes it clear that those living on Grosvenor Square are occupying their town houses.  These were bases for the social season, as all the elite families living in London had a country estate.  This was certainly the case for Lord Harrowby who was the owner of 39, (44) Grosvenor Square the target of the Cato Street Conspirators.  Dudley Ryder, 1st Earl of Harrowby, (1762 –1847) was a prominent Tory politician and MP for Tiverton. As Viscount Sandon and Earl of Harrowby, he owned the palatial Sandon Hall in Staffordshire, as well as his grand Marylebone home. By a strange twist of fate, William Davidson, had once worked at Sandon Hall for Harrowby as a cabinet maker.  From November 1809 to June 1812 Harrowby served in the cabinet of Spencer Perceval and from 1812-27 was Lord President of the Council under Lord Liverpool.  Such was the prestige of his home at Grosvenor Square that it had become an informal meeting place for members of Lord Liverpool’s cabinet, and consequently the target of the Cato Street conspirators.  At one such dinner, on 21st June 1815, Major the Hon. Henry Percy delivered the news of Wellington’s victory at Waterloo to the Minister of State for War, Earl Bathurst, and it was from the steps of Harrowby’s house that the news of victory was declared to the public.

The sheer opulence by which the Ton lived during this period is certainly well portrayed in Bridgerton. Lord Harrowby’s home on Grosvenor Square would have fitted perfectly with the ’look’ of the series. However, the real world of 1820 was a time of wide-spread poverty and starvation. The extravagant splendour of Harrowby’s homes at both Sandon Hall and Grosvenor Square inevitably provoked a reaction from someone like William Davidson who had a foot in both worlds.

Unfortunately, we can no longer view Harrowby’s house which was demolished in the 1950s.  For us to appreciate just how opulent it was we have to recreate it virtually. As part of our project we commissioned RH Viz to use archive material from the British Architectural survey, and interior photographs of the house dating from 1874, to recreate the interior of Lord Harrowby’s Grosvenor Square home, as it would have looked on the night of the proposed attack on 23rd February 1820.

February 23rd 1820: The Capture of the Cato Street Conspirators

On that cold February night in 1820, the snow lay thick on the roads, roofs and railings of Marylebone.  William Davidson, who had once been commissioned to make fine furniture for Lord Harrowby’s country retreat, was now trying to put his former employer in a different kind of wooden box.  As part of our education programme we worked with film makers Digital Works and actor Michael Lyall in the role of William Davidson to tell the tale of what happened that n

To succeed on their mission the conspirators would need to neutralise the threat posed not only by the cavalry barracks at King Street, but by the Foot Guard’s barracks in Portman Square.  They were hoping many of the soldiers based at these barracks and at Horse Guards in central Westminster would be in Windsor for the funeral of the recently deceased King George III. Harrison was confident that the remaining soldiers could be dealt with in the same way the cabinet would be-with a few well-placed hand grenades and a barrel full of luck.

RH Viz worked with Household Cavalry Museum director Alice Pearson to recreate how the Horse Guards barracks would have looked.