You are here: HomenextResearching the ConspiracynextJohn Bellingham: Lone Assassin or Unwitting Patsy in a Larger Conspiracy 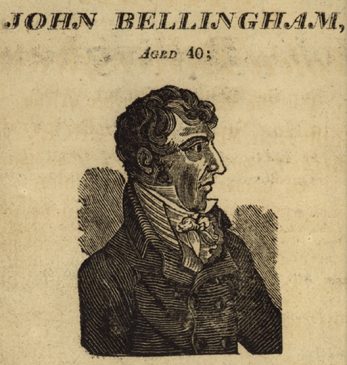 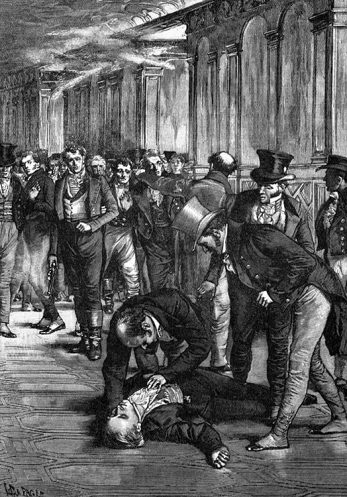 zoom
1909 Print of the Aftermath of Spencer Perceval's Assassination

Spencer Perceval is best known as the only Prime Minister to be assassinated in British history. But what about his killer? Was John Bellingham simply a desperate last act from a desperate man, or was there a larger plot afoot? Have a look at his life and evidence and decide for yourself.

John Bellingham was the son of John Bellingham Sr., a land agent, and Elizabeth, daughter from a well-off family in Huntingdonshire. Bellingham’s father became mentally ill when Bellingham was nine and died in an asylum two years later. His family was provided for by his mother’s brother-in-law, William Daw. Daw started Bellingham down the road towards Spencer Perceval by arranging his appointment as an officer in the East India Trading Company. Daw bailed Bellingham out of several misadventures, including his first brush with debtor’s prison. After narrowly escaping prison, Bellingham settled down and became a bookkeeper with a firm trading in Russia. After learning from his previous mistakes, Bellingham worked hard and was appointed to be the firm’s representative in Archangel, Russia.

Bellingham made frequent trips between England and Russia. In between one of them, he married and had a child. In 1804, preparing to return home from Russia, Bellingham was detained due to an unpaid debt. However, the debt was not Bellingham’s directly. Bellingham was deemed accountable for debts that a business associate had accumulated while in Russia. After being imprisoned, Bellingham sought the help of Lord Granville Leveson-Gower, the British ambassador to Russia, but he was turned away, supposedly because it was a civil matter and British consul Sir Stephen Shairp could not interfere. Bellingham repeatedly appealed to his ambassador over the course of three years, until a petition sent directly to Tsar Alexander freed him in December 1809.

After finally being released from debtor’s prison in Russia, Bellingham made his way back home to England. Once home, Bellingham sought compensation from the government for the time he spent imprisoned, and the financial losses accumulated during that time. He believed that Britain owed him this because of the repeated rejections for help during his time in Russia. He was rejected. Repeatedly. In order, Bellingham petitioned the Foreign Office, the Treasury, the Privy Council, and Spencer Perceval himself. He also sent copies of his petition to every member of Parliament. After repeated refusals from every avenue, Bellingham was desperate. On 20 April 1812, John Bellingham purchased two .50 calibre pistols.

On 11 May 1812, John Bellingham sat quietly in the House of Commons lobby. He had made several visits over the preceding weeks, so no one thought it odd that he was there. Spencer Perceval walked into the lobby and was subsequently shot in the chest by Bellingham. Rather than escape onto the street (an easy action during the confusion), Bellingham returned to sitting quietly and waited to be arrested. When asked about why he assassinated the Prime Minister, Bellingham explained that he had exhausted every official avenue of redress and felt justified in his actions. That same day, Bellingham was committed to Newgate Prison to await trial.

Bellingham was tried, found guilty, and executed within one week of the assassination. During the trial, Bellingham’s only reasonable defence was an insanity plea as his family history indicated. And yet, when it was dismissed by the attorney general, Bellingham thanked him for throwing out that defence and maintained that he was of sound mind when he shot Perceval. The jury retired for only fifteen minutes before they returned with a guilty verdict. Bellingham was executed by hanging on 18 May 1812.

The official conclusion from Bellingham’s trial was that Bellingham acted on his own, and the assassination of Spencer Perceval was the culmination of years of refusals for aid from the government. Throughout his trial, Bellingham never wavered in his statement that he was not a part of a larger plot. And yet, starving workers, and others affected by Perceval’s policies, rejoiced at the news of Perceval’s death. They blessed and thanked Bellingham for ridding the country of Perceval and regretted that he had not taken out other disliked members of Parliament when he had the chance. Spencer Perceval’s support of the 1807 Orders in Council, repeal of the Statute of Artificers, crackdown on Luddite activities, and general inhibition of world trade had made him no shortage of enemies, at home and abroad.

Among Perceval’s allies and the government, there was fear that Perceval’s violent death would spark a revolution. Frame breaking, a popular Luddite protest action, had become a capital crime under Perceval’s Ministry, and tensions between Luddites and officials were at an all time high. Simultaneously, Perceval’s refusal to repeal the Orders in Council did not help matters with the merchant class and their valid concerns over war with America, and her cotton traders, if they were not repealed. The Orders in Council restricted neutral trade and created a naval blockade around France which damaged world trade and the economies of all countries attempting to trade with France, including America. War did break out in June 1812, a month after Perceval’s death, but no revolution sparked at home.

On the surface, Bellingham’s trial was cut and dry. He was seen shooting Perceval by several witnesses and there was question of who committed the crime. However, there is a small sticking point. How did John Bellingham afford the guns? As a supposedly impoverished man, it is curious that Bellingham was able pay his bills given how desperate he was to obtain financial restitution from the government.

One favoured answer is that he had a sponsor of some kind. Andrew Linklater, author of Why Spencer Perceval Had to Die: The Assassination of a British Prime Minister, points his finger at Bellingham’s fellow Liverpool merchant, Thomas Wilson, and American merchant, Elisha Peck. The Orders in Council were originally created to blockade trade with France, but by 1812, they were an excuse to police the slave trade of other nations, hampering legitimate trade in the process. The slave trade between the West Indies, other European nations, and the Americas was greatly damaged by the Orders in Council being used in this manner. Even though, Elisha Peck was not a slave trader himself, he was impacted by this policy as an American merchant in Liverpool. Liverpool was one of the places hit hardest by the Orders in Council policy. Bellingham lived in Liverpool and saw the economic recession that Perceval was blamed for first hand.  Following this theory, the merchants at home and abroad would have benefitted from Perceval’s death and the subsequent repeal of the Orders in Council. However, it must be noted that this is all pure speculation on Linklater’s part and no evidence has been found.

As of today, definitive evidence of a conspiracy has not been found. Regardless, Perceval’s death set the stage for the Cato Street Conspiracy. Lord Liverpool’s even more restrictive government and Perceval’s remaining policies created the desperation needed to attempt assassination again. Bellingham may have succeeded where the Conspirators failed, but he did not plan for what would happen afterwards. John Bellingham was one man’s last stand against the government who denied him. The Cato Street Conspirators hoped to start a revolution for a better Britain than the one they lived in.