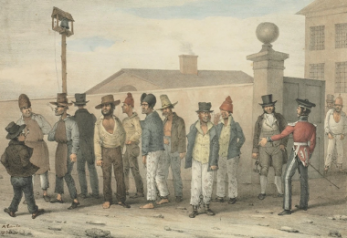 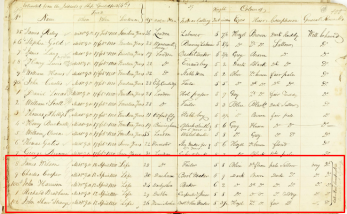 zoom
Ships Log of the Guildford, showing the names of the convicts.
Tasmania Library, CON13-1-2 Image 64 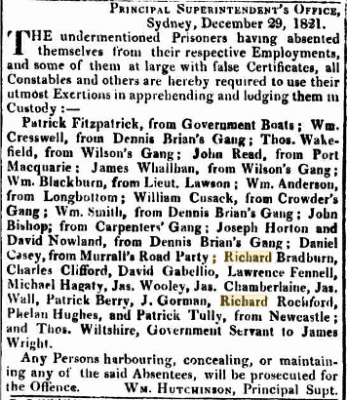 zoom
A Newspaper dispatch regarding the escape of prisoners in Australia, among them Richard Bradburn.
The Sydney Gazette and New South Wales Advertiser. Sat 29 Dec, 1821. Page 1 - National Library of Australia 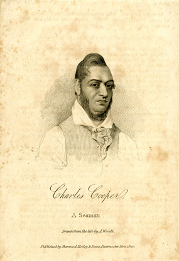 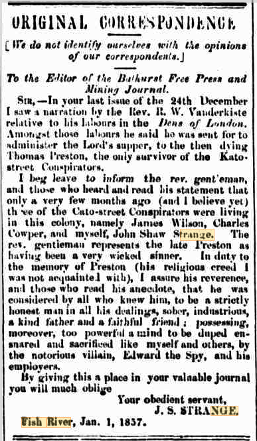 zoom
When John Shaw Strange heard that a newspaper in England had written a story about the supposed last surviving member of the Cato Street conspiracy Thomas Preston, he wrote to the paper to assure them that he was still very much alive in Australia.
Bathurst Free Press and Mining Journal. Wed 14 Jan, 1857.  Page 2 - National Library of Australia

Of the 11 conspirators initially sentenced to death, five were able to alter the punishment to instead prescribe imprisonment in Australia. This group was composed of four Englishmen, Charles Cooper (a bootmaker), John Harrison (a veteran and baker), John Shaw Strange (A boot and shoemaker), and James Wilson (another veteran and tailor), along with the Irishman Richard Bradburn (a carpenter). These men boarded the prison ship Guildford docked off the harbor of Portsmith on May 2nd, just a day after the execution of the remainder of the conspirators. The ship was stationed in the Solent; a strait between the Isle of Wright and the main British archipelago. It was not until the 14th of May that the prison ship set sail, and began its journey, comprising some 139 days, including a two week stop at the Cape Colony in South Africa. Their behavior during this time period was noted as being exemplar.

The Guildford arrived in Australia on September 30, 1820, and disembarked its passenger cargo on the 6th of October. Upon arrival in Sydney, the conspirators were held for 10 days, eventually being sent to another settlement at Newcastle 160 km to the north. This settlement housed those who were deemed to be problem prisoners, and secondary offenders who were found guilty of a crime after arriving in Australia for their sentence. It is believed that this was due to a letter that Governor Lachlan Macquarie, in charge of New South Wales, received from the Under Secretary of State for War and the Colonies, warning of the arrival and risk that the conspirators presented. At the settlement in Newcastle, the men were initially part of the “Goal Gang’ and forced to partake in heavy labor with reduced rations. However, thanks to good behavior on their part the conspirators were able to, within the span of approximately two months, be reassigned to different job postings throughout the settlement. Here the  the convicts remained for some time.

The Unique Case of Richard Bradburn

Richard Bradburn, along with numerous other convicts, escaped Newcastle in December of 1821. While on the run he met a man with remarkably similar physical characteristics by the name of Francis Clarke, who escaped from Sydney. As a result of the numerous runaways roaming NSW, the new Governor Sir Thomas Brisbane, issued a statement pardoning all those who turned themselves in from further punishment as long as they did not commit murder or other violent acts while on the run. Bradburn and Clarke decided that, since Clarkes punishment was nearly up in Sydney, Bradburn could assume his identity and finish the sentence. This would allow him to obtain a Ticket of Leave which allowed more freedom to convicts, though within a defined geographical area. Clarke, as he was a wanted man no more, could evade suspicion and even perhaps return home to England. Bradburn turned himself in by the end of January 1822. He was subsequently transported to another settlement 200km north of Newcastle in Port Macquarie. By the time of Clarkes release, the Commandant of Port Macquarie suspected Bradburn’s deception. However, he was impressed by his work ethic, skills as a carpenter and good behavior, and allowed Bradburn to escape punishment. By the end of 1822, Bradburn was appointed to chief carpenter at Port Macquarie, a position he held for five years. He received a TOL for the Sydney district in the middle of 1827 and worked there as a carpenter and a joiner. Bradburn left behind a wife and eight children in England, but never applied for them to be sent over. Instead, he married a Scottish convict by the name of Helen Carr in late 1829. He died in December of 1835, aged 44 years old. He was the first of the conspirators to die in Australia.

In 1822 Brisbane disbanded the Newcastle penal settlement and encouraged settlers to move in. Throughout the next year, the convicts initially stationed at Newcastle were pressed into service all over the colony. By 1824, the four remaining conspirators arrived at Bathurst, 200 km Northwest of Sydney.

Charles Cooper was initially assigned to be a servant to a non-criminal settler, and then reassigned to a bootmaker’s shop in Sydney. He obtained his TOL for the Liverpool district in 1834, 27 km to the southwest of Sydney, and appealed to have this changed several times over the course of the 1840’s. It is known that he spend additional time in jail for drunkenness. Coopers whereabouts during the 1850’s and 60’s is largely unknown. He never married, and died in Liverpool, NSW on November 13, 1866 at the age of 80.

James Wilson worked as a servant, and even as a police constable during his stint at Bathurst. Wilson applied for his wife and two children to be sent to Australia in 1824. While this request was approved, his family decided to stay in England. By 1829 he received a TOL for the Bathurst district, and a conditional pardon in 1839. This meant that he was essentially a free man but could not return to England. He became known as a very fashionable tailor in his district. He married a woman by the name of Eleanor Hagan in Sydney on July 27th, 1857. He died In Sydney too, on March 5th 1859 at the age of 66.

John Harrison also worked as a servant to settlers around Bathurst. In 1824 he petitioned to have his wife and three children to travel to Australia, but while this request was granted it is unknown if they ever took advantage of the opportunity. By 1828 he was a police constable working with a fellow conspirator, John Shaw Strange. During this period of time, the two conspirators were responsible for the capture of some of the gang members of the Storey Bushranging Gang. Harrison earned his TOL for the Bathurst district the next year in 1829, and a conditional pardon in 1836. After obtaining his TOL, he opened a bakery and was known in Bathurst at the premiere baker in the district. He died in Bathurst on the 17th of April, 1839 at the age of 54.

John Shaw Strange worked as a personal messenger to the Commandant in Newcastle by 1821, and continued this position when he and his fellow conspirators were transported to Bathurst. He applied in 1822 to have his wife and children brought to Australia, unsuccessfully. By 1825 he was a constable under the Commandant, and was involved in numerous investigations and arrests of a multitude of criminals, including the Storey Bushranging Gang, for which he received praise by the Commandant. In fact, Shaw Strange was granted a TOL earlier than any other conspirator by 1825 on the order of the Governor. Specified for Sydney, he applied in 1827 to change the district to Bathurst where he continued to work as a constable. On January 27th, 1829 he retired as a constable. That same year, in April he married a local woman by the name of Jane Bayliss, with who he had ten children between 1832 and 1857. In 1830 he took a seven-year lease on a government tannery in Bathurst, which proved to be a successful business. Shaw Strange received a conditional pardon in 1832. His lease expired in 1837, but he sought to not renew it thanks to its important position in the rapidly expanding town. In the 30’s and 40’s, Shaw Strange bought multiple properties of land and applied for a publican’s license. He in fact leased the Mountaineers Inn at Emu Plains, but unfortunately this was not a successful business venture. Afterwards, Shaw Strange tried his hand at farming in a settlement 30km Southeast of Bathurst called Fish Creek. It was there he died, surrounded by family on January 11th, 1868. He was the last surviving conspirator.

All the members of the Cato Street Conspiracy that were transported to Australia seemed to have done very well for themselves, carving out as happy and healthy of a life that could be expected from them. They all participated as good members of Australian society until their deaths, though unrepentant about their roles in the conspiracy. Australian records indicate that none of the men’s wives or children journeyed to Australia. The four married conspirators (Richard Bradburn, James Wilson, John Harrison, and John Shaw Strange) left behind a combined seventeen children in England: as with most individuals transported to the Australian penal colonies, these men had two families, one of which they never saw again.