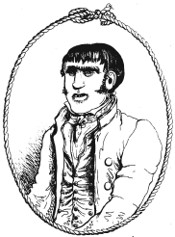 zoom
A fictitious representation of Ketch, in full executioner garb.

Systems of justice, by necessity and design, have different roles that oversee and compliment each other. One such role that is typically viewed in this way is that of the executioner. The executioner at Newgate Prison was known colloquially as Jack Ketch; the history of this name is an intriguing aspect of the Cato Street Conspiracy. This article will discuss the origin of this namesake, as well as the men who are known to have executed the Conspirators on 1st May 1820.

Newgate Prisons’  history can be seen in another article on this site. During its 5th century of use in the 1600’s, it became more infamous for the man who conducted the executions during the reign of Charles II; Jack Ketch, sometimes referred to as John. Jack Ketch was appointed in 1663 as a principal executor in the City of London, executing death sentences during the tumultuous times in which he lived. Some examples of his grim work can be seen in the execution of William Russel, and James Scott. Ketch oversaw at least 8 public executions per year, and worked for 23 years. On the low end, he still oversaw the execution of hundreds of convicts. Most of these were through hanging, with decapitation, drawing, hanging, and quartering, and other punishments reserved for individuals convicted of more serious crimes, like High Treason. Ketch’s notoriety comes from his bungled beheadings of high profile convicts. The previously mentioned William Russel, executed on 21 July 1683 for his role in the Rye House Plot, took four concentrated blows with an axe to finally separate his head from his body. Of course, such an affair was quite the scandal; he was forced to write an apology for his mismanagement of the beheading. Additionally, the execution of James Scott, Duke of Monmouth on 15 July 1685 was also mismanaged. Five axe blows were required to separate the Duke from his head. Some believe these performances to be purposeful. Because of these high profile, brutal executions, as well as his role in the more macabre process of hanging, drawing, and quartering, Ketch accrued a rather negative reputation. His name quickly became synonymous with Satan, death, and executioners in general. Newgate Prison, where he had his office, was known for a time as ‘Jack Ketch’s Kitchen.’ Ketch died just a year after the execution of James Scott. His legacy would live on.

The Executioner of the Conspiracists

At the time of the Cato Street Conspiracy, a tradition had come about to call the executioners present at Newgate by the name Jack Ketch Even though the Conspiracy took place 134 years after the death of Ketch, his moniker still remained as an ominous presence in the shadow of Newgate Prison. Additionally, the identity was used to preserve the identity of the executioners. In 1820, the man in the head role as executioner went by the name of James Botting, known also as ‘Jemmy’. Botting was the first London hangman to receive a salary, earning approximately £1 a week. He, like many before him working out of Newgate, inherited the position after the death of his ‘master,’ John Langley. Botting was executioner for just 3 years before the ordered execution of the Cato Street Conspiracists. He was assisted by Thomas Cheshire, known as “Old Cheese”, and these two men were the ones to hang the conspiracists. An unknown, third individual was the one to decapitate the conspiracists. The ease at which he did so led many to assume that he had to be a surgeon of some sort; no names were given but one newspaper speculatively reported that a surgeon on Argyll Street was involved. This was not true; regardless, his house was burned down in revenge by the surviving Spencean Philanthropists and the surgeon in question narrowly survived an assassination attempt. Botting would retire just a month after the execution of the conspiracists.